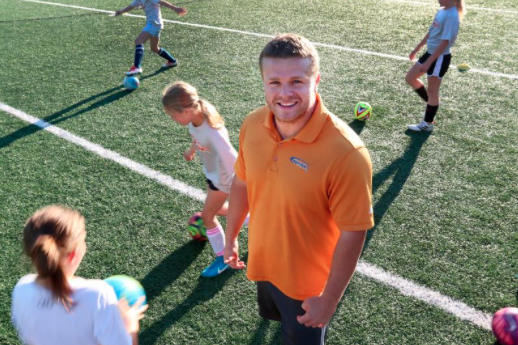 Overland Park Soccer Club (OPSC) is pleased to announce that Tom Holmes has been named as the new Club Administrator and will play an essential role in all operations of the club. Tom is a sports management specialist with an expertise in soccer and will be invaluable is making sure all our programs from Pre-K to U19 run smoothly and offer the best opportunities possible for the players and their families.

Tom is no stranger to the club, as he has been coaching multiple competitive teams for OPSC for the past three years. If you’ve met Tom, you know he’s from the UK and has deep love of football (though we call it soccer). He came to the States nearly a decade ago after finishing his bachelor’s degree in Sports Studies. Since then, he has managed and led dozens of camps for OPSC and Challenger Sports, as well as serving as the head coach for nearly 20 soccer teams from U5 – U19.

While his focus is instilling a love for the game in a positive environment, he’s no stranger to trophy ceremonies as a coach. For nearly four years, he also managed camps and the instructional programs for Challenger Sports, leading the ‘train the trainer’ efforts for British Soccer Camp instructors from around the world.

lucky to have his abilities and experience to draw from. We hope you’ll help us welcome Tom in his new role and let him know what OPSC can do for you.